NanoString is a fully automated technology ensuring precise and reproducible quantification of either RNA or DNA, making it compatible with clinical research. The technology is robust across many sample types and qualities, both tissues of poor and varying quality can be used, including FFPE tissue sections.

NanoString can detect target molecules as small as 100 base pairs, and also even miRNAs, and only requires a limited input amount from 25 ng of RNA. This enables multiplex gene expression profiling with detection sensitivity down to 1 copy per cell.

Digital Quantification of DNA and RNA

Each assay consists of two probes of 50 bp, which are complementary to the target: a capture probe linked to biotin for immobilization and purification, and a reporter probe containing a unique fluorescent barcode.

The technology is reliable, due to the simplicity of the method. Once the target-probe complexes are hybridized, the complexes are captured using the biotin tag on the capture probe on a streptavidin-coated surface, where they are aligned and immobilized for imaging, and excess probe is removed.

A scanner then digitally counts each fluorescent barcode hybridized to an RNA or DNA molecule and put together the counts for a total count of the target in the sample.

The data from the digital reads are normalized to internal controls and a set of reference genes. This will generate highly precise relative counts that can be interpreted in terms of relative change across samples. Absolute counts are not calculated using this technology. 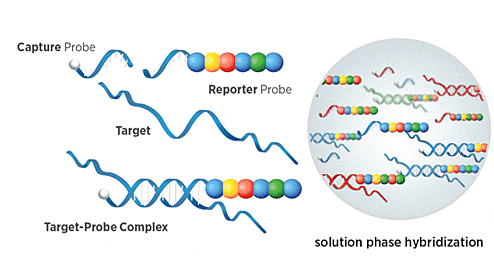 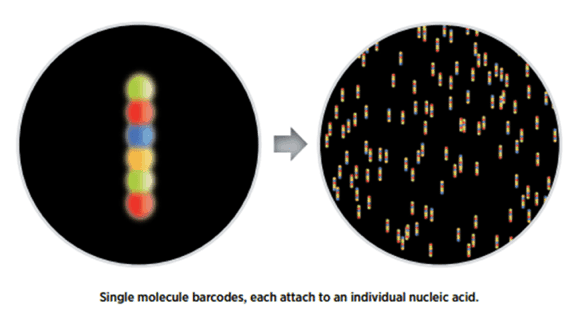 Analysis of the transcriptome can be useful as a first line of investigation in explorative studies, like drug target discovery or in search of biomarkers for a specific disease. The transcriptome changes rapidly as response to the external or internal environment in the body, and thus may be able to predict certain conditions.

Below are listed some of the panels currently available:

For information about other panels or of the genes included in the panels, don’t hesitate to ask us. We are also happy to help choosing the right panel for your project. See also NanoStrings website for more panels.

To be able to detect the small ~22 nucleotide miRNAs, the technology has been enhanced with the use of additional specific oligos. In addition to the capture and reporter probe, a target specific bridge oligo and miRTag is included in the miRNA assays. Thus, the miRNA length is extended with the miRTag by the use of the bridge oligo, and the miRNA:miRTag molecule can then hybridize to the two probes and be counted as usual.

The miRNA expression panels contain 827, 577 and 423 miRNA assays for human, mouse and rat, respectively, and app. 100 ng of total RNA is required for the analysis.

Genomic alterations can indeed lead to disruption or modification of specific processes and cause serious diseases like cancer or other genetic disorders.

Copy Number Variation (CNV) is known as a number of repeated elements in the genome, which can vary in the population and can result in e.g. protein misfolding and inactivity giving rise to disease.

NanoString has developed the panel v2 Cancer CN Assay for detection of copy number variation of 87 genes commonly amplified or deleted in cancer. The input amount for the analysis is 300 ng genomic DNA.

Gene Fusion as the name indicates, refers to the fusion of two separate genes by chromosomal rearrangement resulting in one hybrid gene. Gene fusions are often found to be drivers for cancer, and the resulting gene is referred to as an oncogene. NanoString has developed two gene fusion panels:

The RNA input for Gene Fusion assays is app. 100 ng of total RNA, but up to 300 ng if the RNA source is FFPE tissue.